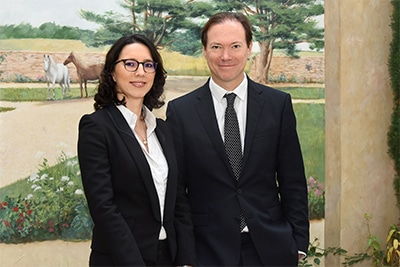 Cyril BOURAYNE has been practicing as lawyer since 1992. He has cofounded and codirected since 1997 the firm DIZIER & BOURAYNE for almost 20 years.

Sigrid PREISSL worked in this firm from 2005 to 2016. She benefits from a Franco-German double culture and was particularly in charge of files with an international dimension.

In 2016, Cyril BOURAYNE and Sigrid PREISSL decided to develop their synergies acquired during more than 10 years of collaboration, in a new structure, modern, joint, dynamic: the firm BOURAYNE & PREISSL.

In this frame, they continue with their staff, providing advice and assistance in pre-litigation (by means of methods of alternative dispute resolution: negotiation, mediation, conciliation, collaborative proceedings, etc.) and litigation before state courts or arbitration bodies before which they plead regularly.

Their ambition: to offer a competitive service of excellence in their main areas of practice: economic law, transportation and logistics law, industrial risks and labor law.

Their methods: knowing and understanding the activity of their clients, assisting them with the determination and expression of their objectives, elaborating a proper strategy to achieve them, informing them perfectly.

Their results: a quality of service which lives up to clients’ expectations, a very high level of satisfaction, loyal clients. 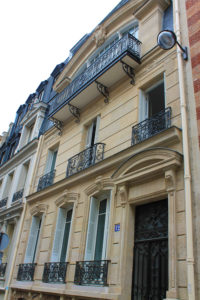 The law firm BOURAYNE & PREISSL established on July 15th, 2016 to the location of the former city palace of the Prince of Merode. At 12 rue Jacques Bingen, the location is in the heart of the Plaine Monceau, close to the park which bears the same name. The park was created under Napolean III in 1866.

Before the French Revolution, the Plaine Monceau was a popular hunting destination. In contrast to today’s environment, the location was once a rural area; a small number of farmhouses were the only sign of human life. The area was in close connection to a small village which was home to several hundred inabitants -the community of Batignolles-Monceau- which became part of the city of Paris in 1860.

The Plaine Monceau later became the scene of a gigantic real estate operation under the influence of the Pereire brothers –Isaac and Emile- who were both bankers, industrialists, and successful businessmen.

They purchased half of the Monceau park, which was significantly larger at the time, and created a new neighborhood with sumptuous city palaces. Living in this area became synonymous with success and fortune. Aristocracy and the higher class as well as artists and demi-mondaines frequently visited the area.

Under the Second Empire and the early years of the 3rd Republic, rue Jacques Bingen, then called rue de Montchanin, was home to individuals who lived rich, intellectual and artistic lives.

In 1884, Guy de Maupassant moved in with his cousin who was an artist and painter. They lived at 10 Rue de Montchanin, which is now the embassy of Zimbabwe. There he organized fabulous receptions that put his rich and lively imagination to good use. His valet members recall, « Once, my master invited a group of arabians to rue Montchanin. They arrived directly from Alger to give representations at the word exhibition. He took advantage of their presence to offer their skills as fabulous and original artists to some of his privileged friends. » (François Cassard, Nouveaux souvenirs intimes sur Guy de Maupassant, Paris, Nizet, 1962).

The construction of the Prince of Merode’s city palace was finally complete in 1866. Today, it is still possible to admire the magnificent frescos painted by the greatest artists of their time, such as Henri Léopold Levy.

In 1946, the street is renamed after Jacques Bingen, a hero of the French Resistance, delegate of General de Gaulle, « Compagnon de la Libération », and referred to by Jean Lacouture as « one of the 3 or 4 most outstanding personalities of the Resistance ». On May 12th, 1944, Jacques Bingen made the decision to poison himself rather than take the risk of betraying one of his companions under torture.

Located in the Prince of Merode’s city palace, the firm welcomes its clients in a gorgeous classical Parisian building dating back to 1866. Magnificient frescos still remain nowadays, such as this one painted by Henri Léopold Levy.