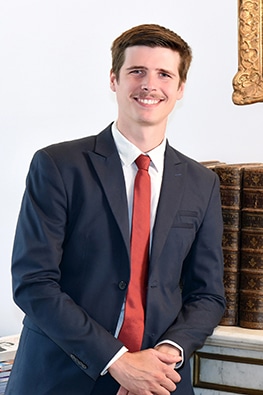 Antoine CHAUVEAU is a member of the association INITIADROIT, whose objective is to open up the law to young people through interventions in secondary schools. These interventions, based on practical case law, allow students to become aware of their rights and duties, while making them discover the presence of law in their daily lives.

He is also a member of the Alumni Panthéon-Sorbonne Firenze network, which gathers former students of the Master degree in French and Italian law.

Antoine CHAUVEAU has a 5-year double Master in French and Italian law from the University of Paris I and the University of Florence, during which he wrote a Tesi di Laurea on the international public order exception between France and Italy.

Antoine CHAUVEAU then specialised in arbitration and international trade law at the University of Paris I Panthéon-Sorbonne.

He is used to pleading before all types of courts, such as Commercial Courts, Judicial Courts or Courts of Appeal.

Thanks to his studies and professional experience, Antoine’s working languages are French, English and Italian.

Antoine takes advantage of his free time to discover new places by bike, to enjoy the social and cultural life of Paris or to take care of his plants and his goldfish.