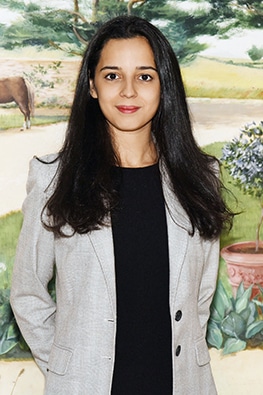 Farida AGHARBI started her studies in 2009 in law at the University of REIMS. International law soon became the primary purpose of her studies. Thus, Farida AGHARBI completed a third year of study in Valencia, in Spain. Afterward, she worked during 6 months in the legal department of a large company based in Mexico.

In 2015, she was admitted to the Master 2 International and European Litigation headed by the Professors Marie-Laure NIBOYET and François-Xavier TRAIN. Highly attracted by international arbitration, she participated, with a representative team of the University of NANTERRE, at the Moot of the Association Andrès Bello of the French-Latin-American lawyers, organized in LA HAVANE, where she obtained the second prize.

In 2017, defending the colours of the High School of Lawyers (HEDAC), Farida AGHARBI, in a team composed by two others law students, competed to the Lamy’s competition in arbitration of a competition law’s case. She obtained the first prize.
In 2018, after completing several trainee lawyer internships both in courts, in-house legal departments and in French and international law firms, she obtained the Professional Lawyer’s Certificate (“CAPA”) and joined BOURAYNE & PREISSL.

Thanks to her high-level training, both in law and business, Farida AGHARBI has developed strong expertise in civil and business litigation as well as in contract drafting and negotiating.
This multidisciplinary training makes her well-suited to assess and address the variety of challenges and cases entrusted to BOURAYNE & PREISSL.

Farida AGHARBI is proficient in English thanks notably to her international studies. Furthermore, she is perfectly fluent in Spanish.

Farida AGHARBI has a great curiosity for both literature and cinema.
Adept at pleasures as simple as sophisticated, she shows a great enthusiasm for new culinary experiences and developed a keen interest for tableware.